Anyone who loves sushi knows the importance of rice in this traditional Japanese dish. It’s also important to know which rice is best for sushi.

There is a special type of rice traditionally used by Japanese chefs for sushi. It’s called sushi rice and is made from short-grain Japanese rice.

However, if you’re unable to find it, you can still use other types of rice to make sushi such as Calrose rice and brown rice. Keep reading to learn more!

What Kind of Rice is Used for Sushi Rice?

As mentioned, the best rice for making sushi rice is called “sushi rice.” It can either be short-grain white Japanese rice or medium-grain California rice. It will usually say “sushi rice” directly on the bag. Your grocery store will probably provide it but if not, check your local Asian market.

Due to its shape, rice can be classified into three categories:

Whatever you do, never make sushi with long-grain rice (like Jasmine rice or Basmati rice).

Although long-grain rice is often used in Japanese cuisine, it’s not used for sushi. This is due to its lack of starch so it can’t make the rice stick.

Technically, y several different types of rice can be used in your homemade sushi, but it will not taste the same unless it is sushi rice.

Sushi rice is known for its stickiness, which allows it to stick to the fish and other ingredients. Regular white rice is too fluffy, but it can also be made sticky when cooked in a certain way and with the right ingredients added.

Here is a list of the best types of rice for making sushi:

Japanese rice, also known as Japonica rice, is one of the best strains of rice to make your sushi. It is a combination of ordinary rice and glutinous rice, both of which are short-grained.

One of the highest quality strains of Japanese rice is koshihikari rice. Unfortunately, it happens to be one of the most expensive strains but it can be found in almost every Japanese supermarket.

Sushi rice and Japanese rice are often confused but they are also thought to be two completely different strains of rice.

Sushi rice is actually made by steaming Japanese rice and adding vinegar to it which is why the Japanese name for sushi rice is sumeshi, translated to ‘vinegar rice.’

A rice cooker is the best option to make sushi rice. But you could always use a regular pot if you don’t have one.

Once the rice is done cooking, season it with vinegar, salt, and sugar. By adding these three important ingredients, your sushi will have the ideal balance of sour, salty, and sweet flavors.

This strain of rice originates from California, where it continues to grow since 1950.

Although brown rice is not commonly used for sushi, some people prefer it as it contains 15% fewer calories than white rice.

However, the flavor of brown rice is stronger, so keep that in mind when making your sushi.  Considering its longer boiling time, some people avoid using brown rice.

Nonetheless, this is definitely the healthiest kind of rice.

Types of Rice to Avoid for Sushi

There are a couple of types of rice that people often use for their sushi that is not recommended. 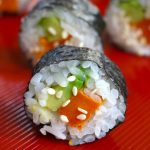 Anyone who loves sushi knows the importance of rice in this traditional Japanese dish. It’s also important to know which rice is best for sushi.
Keyword What Rice is Best for Sushi
Servings 3 cups