Olives are one of those foods that you either really love or really hate. With two of the most popular ones being kalamata and black olives – but what’s the difference?

Here we’re going to look at the differences between Kalamata and black olives and how they can each be used in cooking.

But first, did you know that olives are actually a fruit that grows on olive trees? It’s true!!

Kalamata olives belong to the black olive family, however they are actually dark brown in color and large in size.  It originated from the city of Kalamata, which is in the region of southern Peloponnese, Greece. Today they can be found growing in parts of the world that include the U.S. and Australia.

Black olives, however, have many varieties and can be found growing all over the world, including Greece and the Mediterranean.

Kalamata olives have to be handpicked in order to avoid bruising, and cannot be harvested green. While there are some commercially grown black olives that are hand-picked, they are typically picked using machinery that shakes the olives from the branches.

Harvested when they are fully mature, Kalamata olives then cured in plain or salty water. The curing process takes about a week to remove their bitterness. When ready, kalamatas are then placed in jars that contain a brine made out of vinegar and sometimes olive oil and lemon wedges for flavor.

Black olives, in comparison, can be harvested green and can be artificially ripened using a brining method. To enhance the flavor, an alkaline solution called lye is used and iron is used to lock in the color.  The final step is to add carbon dioxide in the cans and then seal and steam them.

Kalamatas are said to have a deeper purple color that almost looks brown. They are oblong shape that is almost almond-like. They are typically twice the size of black olives.

Black olives have a more round shape, are squatter and have more of that traditional olive shape that you’re familiar with.

Kalamata olives have a richer taste that can be almost sweet and fruity. In contrast, black olives have a more mild taste with less robust flavors.

Keep in mind that both Kalamata and black olives can be bitter when they are first harvested. It’s when they are cured, that they become more appetizing, revealing their flavor characteristics.

Larger in size, Kalamata olives tend to be meatier than many other varieties. Plus, they are also plumper and softer, making it easier for the flesh to fall off their stones easier.

Black olives can be compared to the standard green olives, with both having tougher and chewier skin that can be either hard or rubbery.

The good news is that both Kalamata and black olives are rich in fatty acids. That’s what makes these little snacks perfect to help improve your cholesterol levels while reducing your risk of type 2 diabetes..

Plus, both olives are a great source of vitamin A, iron and antioxidants. They’re also low carb, which makes them a great addition to salads. The bad news? They’re high in sodium and Kalamata olives are about two times higher in calories in fat compared to black olives.

Can You Substitute Kalamata Olives with Black Olives?

Overall, if you’re out of Kalamata olives, it’s ok to substitute in some black olives, although the flavor will be less distinctive.

Below Are some popular ways you can use these olives: 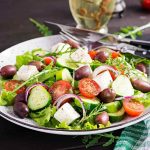 Loaded with olives and vegetables, this greek salad is flavorful, refreshing, and so delicious!
Total Time 10 minutes