America’s most beloved pizza topping, pepperoni, is a type of salami, so what’s the difference between salami vs pepperoni? While they are both cured dry sausages, they have some distinct differences including the ingredients used, taste, textures, ways to enjoy them, and even their historical origins.

Taking its name from the Italian word ‘Salame’, which means ‘salt’ and the collective word for meat, salami was the sausage that started it all.

As an Italian-originated food, salami is used to describe any type of cured, salted and sometimes spicy mixture of encased meats. Its history dates back to ancient times when people needed a way to preserve meat for long periods and prevent germ fermentation.

Quickly it became clear that the curing method did not only serve a preservation purpose but it could also work to enhance the flavor of the product. It was the variety of ingredients used in the recipes, the different preparation techniques, and the type of meat used that led to the discovery of different salami variations.

Depending on the country of origin and other characteristics, there are different types of salami including Genovese salami, Cacciatore, Lardo, Chorizo, Soppressata, and Pepperoni.

Pepperoni is an American variety of spicy salami made from cured pork and beef seasoned with paprika or other chili pepper.

While the word pepperoni has an Italian origin, the pepperoni salami itself is said to be an American invention or, in all fairness, an Italian immigrant invention made in a butcher shop in the USA in the early ‘90s.

It was at this time that pepperoni made its appearance as an American pizza topping although even until the ‘50s, it was regarded as an ethnic Italian plate. After the second world war, things started changing. Different factors contributed to making this dish popular in the wider American society.

Today, the popularity of pepperoni as a pizza topping is indisputable and is still blasting upward. Sources say that 36%-50% of all pizzas ordered across the USA include this spicy yummy ingredient. This doesn’t come as a surprise. From TV ads to artistic forms of expression and emoji food ideas, pepperoni seems to have conquered the heart or stomach of America.

Salami vs Pepperoni: What Are the Differences

The main difference between salami and pepperoni is that while pepperoni refers to a specific type of salami, salami is a generic name that is used to describe different types of salami. Here are a few more key differences:

Salami is often made with pork, beef, or veal. Commonly used spices include grainy black pepper, powdered garlic, vinegar, or white wine and salt. Nitrates are also added to protect the meat from going bad.

Pepperoni is made of pork and beef meat trimmings blended with various spices including paprika, chili pepper, garlic, fennel, cayenne pepper, white pepper, and anise seed. Salt and sodium nitrite are also added to the mixture to serve as curing agents.

Pepperoni is usually slightly spicier than salami. It is sometimes lightly smoky whereas salami usually doesn’t come in a smoked version.

Pepperoni has a fine-grained texture that is softer than salami.

Salami is a popular part of a cold antipasto platter but it can also nicely supplement a wide variety of recipes from soups to pasta sauces, eggs, pizzas, and even salads. Pepperoni is mostly popular for its use as a pizza topping which might have to do with a combination of factors – its wondrous crispy and the curly edge is surely one of them.

While both can be used on pizzas, salami is a much more versatile ingredient than pepperoni. You can also find it in a lot more different types, a simple visit to an Italian salumeria will help you discover how an authentic Italian artisan salami looks like and tastes.

Pepperoni is richer in vitamins A, E, and D. Comparatively, salami is richer in proteins, most B complex vitamins, and minerals. They mostly have negative impacts on overall health.

Differences Between Chorizo and Pepperoni

Can I Use Salami On Pizza?

Yes, you can substitute salami for pepperoni on pizza but it will be less flavorsome so you might want to spend some time seasoning the salami before you put it on the pizza to cook. You could add some garlic or chipotle to the salami before you add it, but it will turn a strange color in the oven when it’s cooking as they burn quickly in the oven. The best option would be to marinade your salami in pepperoncini for 10 minutes before adding it to your pizza, or you could add the salami to some olive oil and various spaces to marinade overnight.

Which Is Better: Pepperoni Or Salami?

It depends on your personal taste and the recipe. Salami is a far more versatile sausage than Pepperoni and has staked its place in the popular lexicon of American cuisine by becoming a staple of hot and cold deli sandwiches from one end of the country to the other.

And you won’t be able to walk into the kitchen of any Italian restaurant without discovering a wealth of dishes that salami is used to prepare. 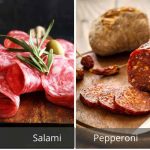 America’s most beloved pizza topping, pepperoni, is a type of salami, so what’s the difference of salami vs pepperoni? While they are both cured dry sausages, they have some distinct differences including the ingredients used, taste, textures, ways to enjoy them, and even their historical origins.
Keyword Salami vs pepperoni
Servings 4