When you have kids that are spread out in age like we do (16, 12 & 6), it’s sometimes hard to find activities that makes everyone happy. There seems to always be someone in the mix that isn’t happy with an activity but we definitely solved that by heading to the Corvette Diner here in San Diego. The Corvette Diner invited my family to come try their food and stay to have fun in their arcade.

I had heard about the Corvette Diner before and knew that it was a 50’s diner but that’s where my knowledge of it ended. When we got the invite, I headed over to their website to check it out. I showed the picture to the kids and they immediately said they wanted to go. Not knowing how busy it might get on a weekend, we chose to go on a Friday afternoon. (This seemed to be a perfect time because there was no wait. We were told that the waitresses wear full beehives on weekend nights but the wait is about 2 hours). 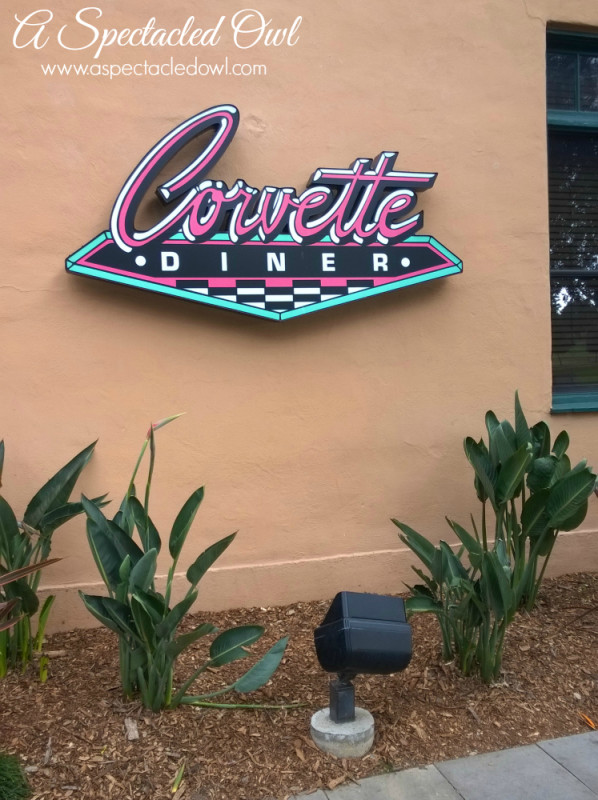 The Corvette Diner is located in Liberty Station. From the outside, the building is just a typical, brown building. But, as soon as you walk into the door, you know you’re in for a fun experience. With music playing, waitresses singing and dancing, a fully restored car behind the hostess desk (and a half of a car hanging on the wall), the atmosphere is a blast! The Corvette Diner has been around since 1987 but moved to this 13,300 sq. ft. facility in 2009 (it’s huge inside with different decorated rooms and a huge arcade). 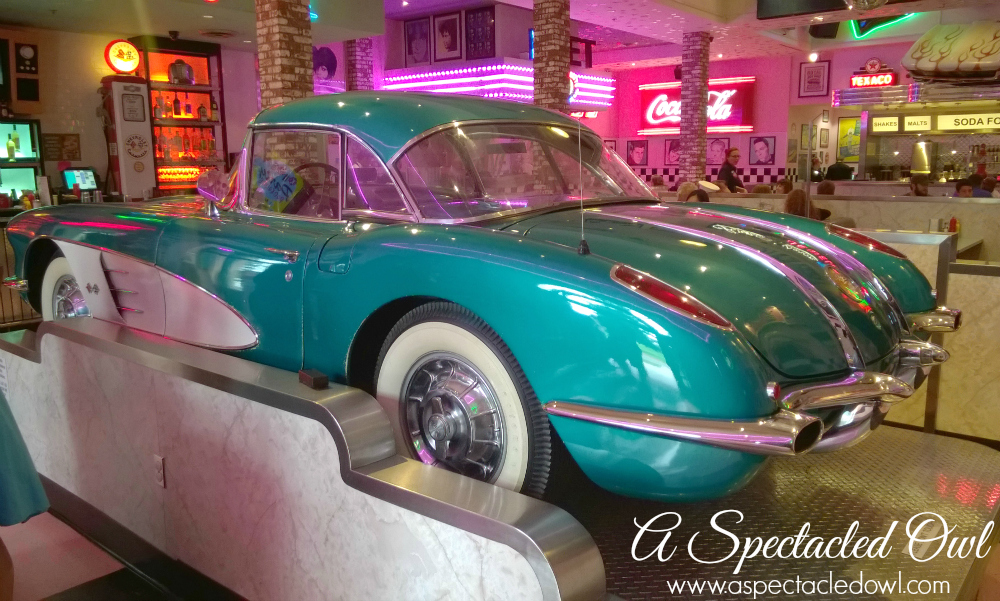 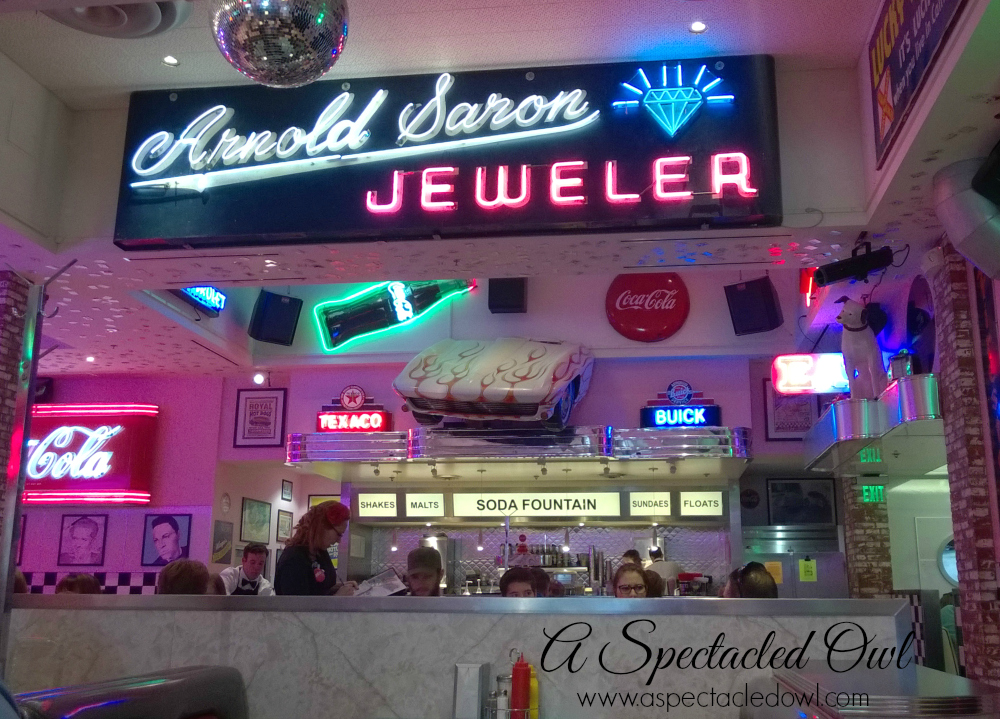 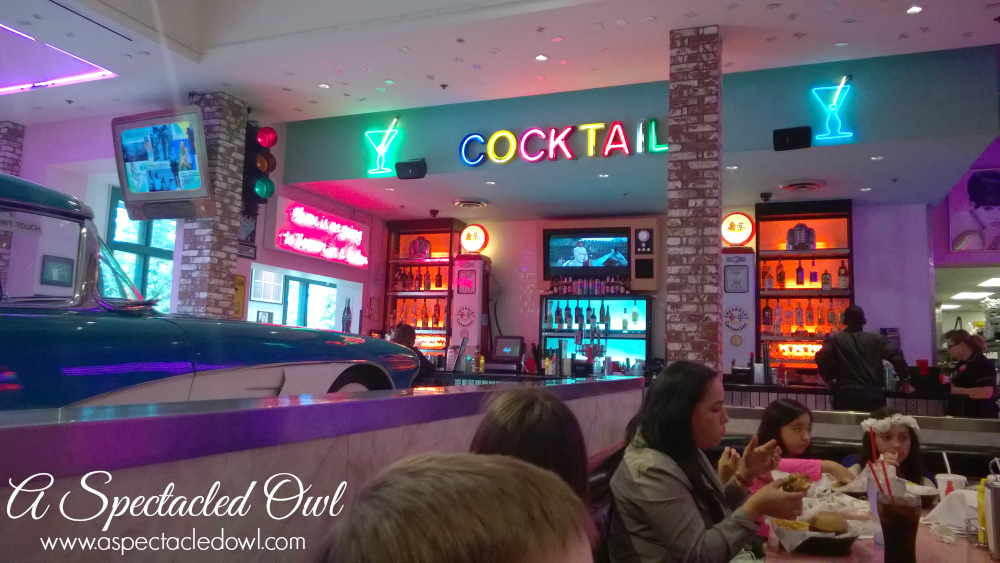 As soon as we sat down, our waitress Judy came over to introduce herself. Everything about Judy was fun, from her outfit to the way she had to excuse herself to go dance with the other servers to the way she decorated our daughter’s hair with straws before we left. She left us with our menus and we realized that this isn’t just a burger joint. There were a lot of different things to choose to eat from burgers, salads, chili, shrimp platters, pasta and more! It was hard to decide but I ended up choosing the Sid’s Cowboy Western (BBQ burger with a HUGE yummy onion ring on it), my husband had the Hubcap Sliders, my oldest son had the Potsie’s Bbq Pork Sand Wich (without the coleslaw & he really liked it!) and our younger two chose kids meals and shakes (Double Fudge). With over 20 varieties of milkshakes & malts, my oldest son knew he wanted to try one and he ended up choosing the Cpbb, which is chocolate, peanut butter & banana and he loved it! 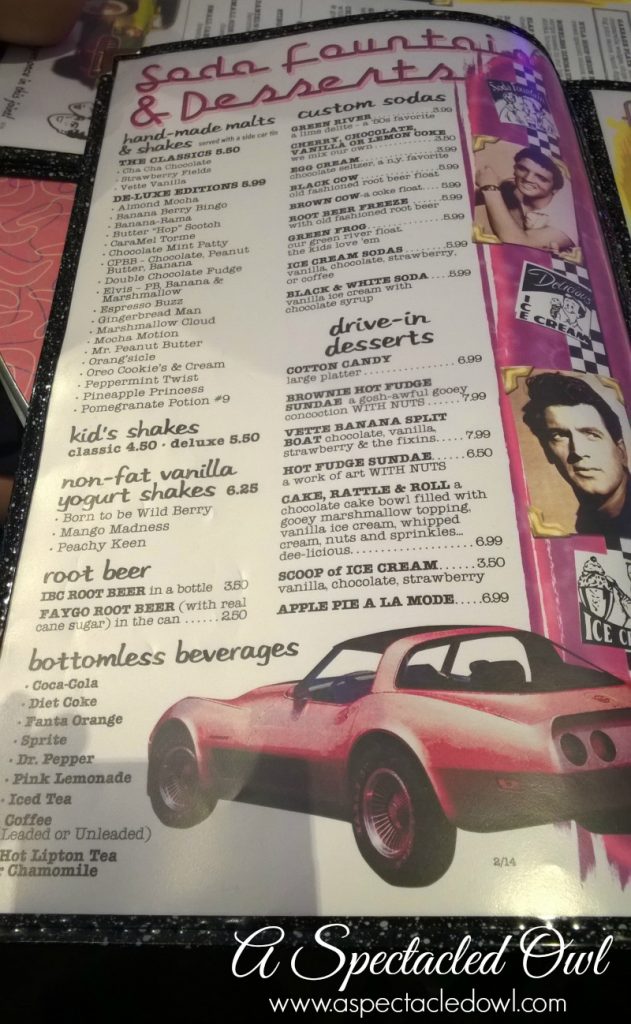 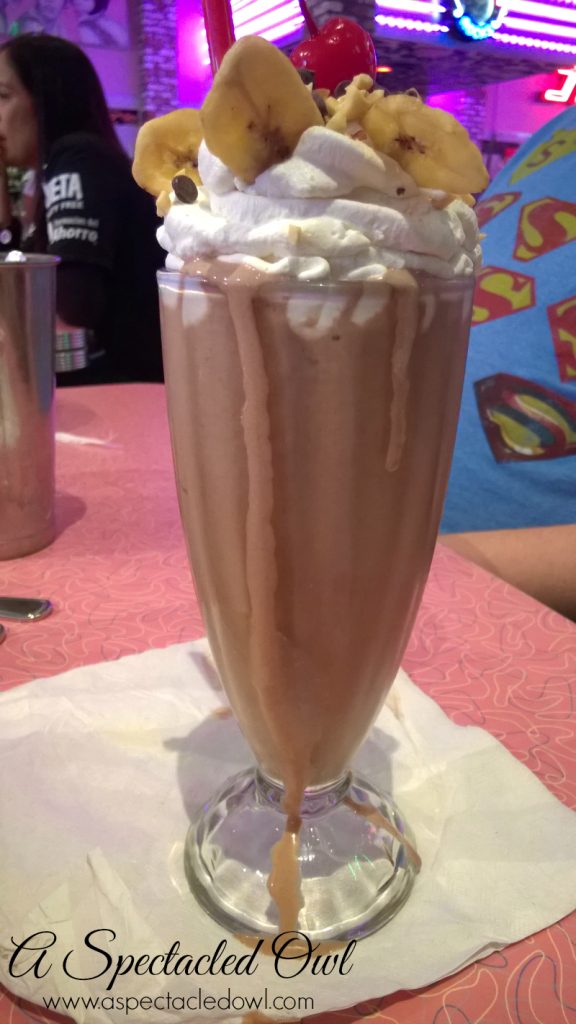 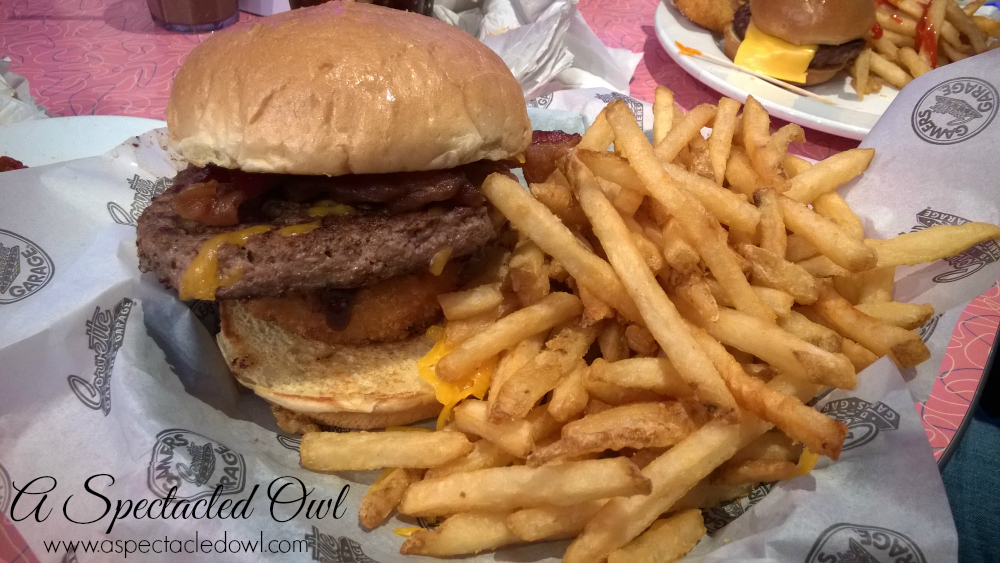 Knowing that that week had been my oldest son’s 16th birthday, Judy brought him a GIANT banana split and she sang to him along with some of the other servers. The banana split was so good and so big! All 5 of us only ate about half because we were so full from the rest of our lunch (did I mention we started with the really yummy fried pickles?!)

After we ate, we headed on over to the arcade, called the Gamer’s Garage, to use our Gamer’s Cards. I loved that you could head to the kiosk to add credits to the cards and if you won tickets (that you turn in for prizes later), the amount of the tickets was stored on the card. No walking around with handfuls of tickets, dropping them everywhere or making it hard to play games. The Gamer’s Garage is 5,000 sq. ft. and filled with over 50 bright, colorful and fun games. We all remarked that almost every game there was a game we had never seen before. There are the classics like pinball and skee ball, but there are also so many new games, like a Doodle Jump game, a touchable screen game featuring Skylanders, a tornado simulator that you can climb inside, and so many more fun games! We ended up staying in the arcade for an hour and a half and we all had a blast! 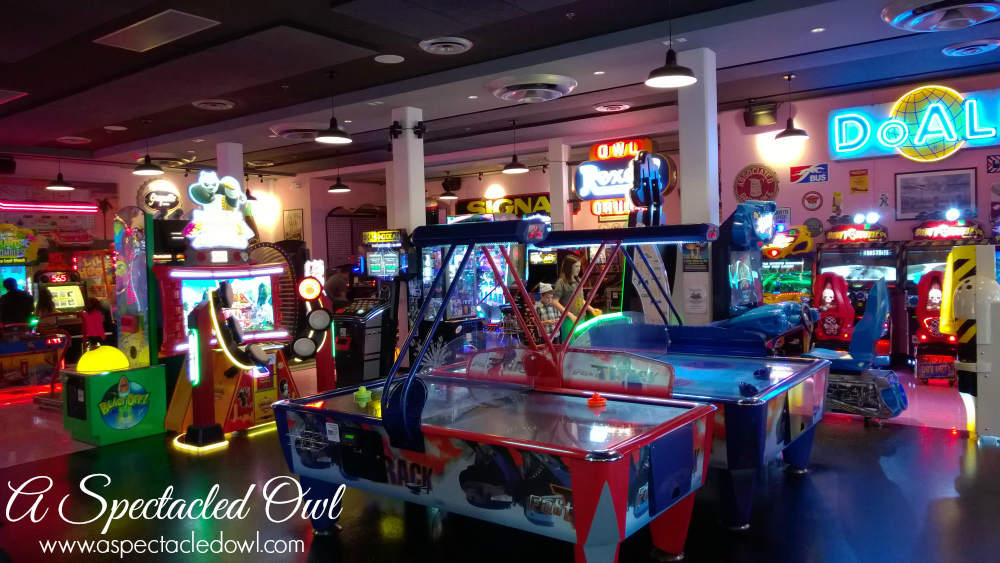 All three of my kids have already asked numerous times when we’re going back and they’re even talking about having birthday parties there. In fact, the Corvette Diner has some great party packages to choose from, no matter if you’re planning a child’s, teen’s or adult’s birthday party. 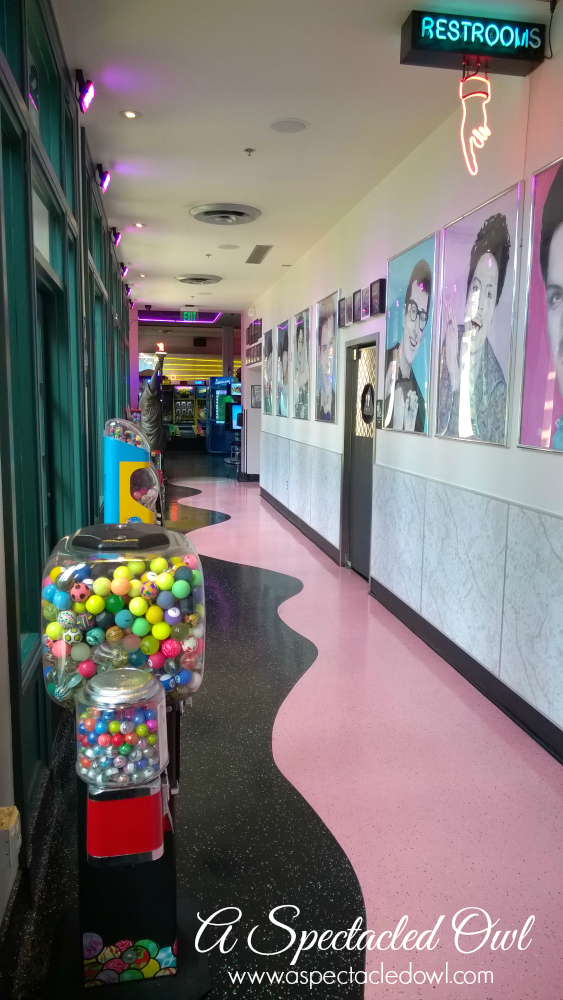 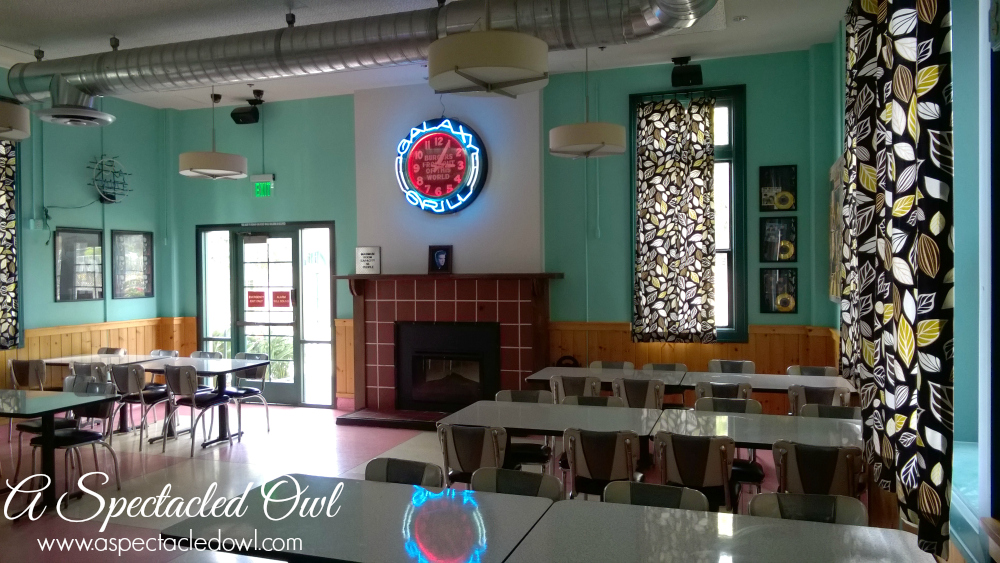 To find out more about the Corvette Diner, you can visit their website and you can also find them on Facebook & Twitter. There is also a great virtual tour and gallery on their site so you can see how colorful & fun it is!