What’s better than cooking a moist and tender spiral ham for a holiday dinner?! Below you will find some tips and tricks on how long to cook a spiral ham and how to prepare one too!

What is a Spiral Ham?

No, it’s not a ham that’s in a spiral shape! It’s a pre-cooked, pre-cut piece of meat! Butchers will create spiral hams by using a machine to make continuous, even cuts. This in turn simplifies the process of preparing and serving ham.

Grab that thermometer and stick it right into the center of the ham. If it has reached an internal temp of 140°F, then it’s done. Taking the temperature will help ensure it’s cooked properly without drying it out.

How Long to Cook A Spiral Ham In The Oven

Cooking times will vary based on the weight of the ham, if it is bone-in or boneless, and if it’s already cooked.

Reheat pre-cooked smoked ham in a preheated 325°F oven until the internal temperature is 135°F to 140°F. A general guideline is about 10 minutes of reheating time for every one pound of ham.

Country ham is heavily salted and is preserved by smoking and curing. Cover the ham with water and boil 20 to 25 minutes per pound of ham. Drain the ham, add your favorite glaze, and brown it for 15 minutes in a preheated 400°F oven.

How to Tell When Ham is Done

The best way to check for doneness is to use an instant-read thermometer. When the ham reaches 145°F, it is safe to eat and can be removed from the oven.

How Long to Cook A Spiral Ham In The Crock Pot

Grab your glaze of choice and brush it on your ham. Add some water or apple juice to the crock pot and cook the spiral ham on the lowest setting for about 2-3 hours.

Note, your spiral ham is precooked, you’re simply aiming to reheat the meat while adding in some flavors.

The best way to keep those juices in and create a moist ham is to wrap it in foil. If you opt to apply a glaze, then unwrap the ham and apply it during the last 15-20 minutes of cooking. 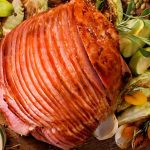 How To Cook A Spiral Ham (Step-By-Step Instructions)

What’s better than cooking a moist and tender spiral ham for a holiday dinner?! Here you will find some tips and tricks on how long to cook a spiral ham and how to prepare one too!
Servings 22