You’ve probably gone to bake at some point only to realize that you are out of parchment paper! So, you might be wondering if you can put wax paper in the oven as a substitute.

There are several different kinds of paper used in cooking and baking. This article will discuss two of the most versatile choices available:  wax paper and parchment paper. They both have many uses in numerous different recipes, yet they each have their own distinct qualities that make them desirable in a variety of situations.

What Is Wax Paper?

It is paper coated in a thin layer of paraffin wax, which is what gives it those non-stick and moisture-resistant qualities. However, it is not heat resistant.

Wax paper is commonly used in cooking or baking but its purposes are not limited to this.  It works well when making arts and crafts, it has been used in film photography and it is also wrapped around things like razor blades for moisture protection.

Can Wax Paper Go in The Oven?

No, wax paper cannot go in the oven. Wax paper can only tolerate very low temperatures for a very short time frame which does not fit the criteria of most ovens.

If you put wax paper in a hot oven, it will begin to melt, just like wax, which will ruin your pans, baked goods, and even your oven. Wax paper is not intended to withstand high temperatures for such long periods of time. Plus, your food will get all waxy!

What Happens If You Put Wax Paper in the Oven?

Keep in mind that wax paper is moisture-resistant but not heat-resistant. The wax will quickly melt at the high temperatures of your oven. Not to mention, the paper could catch on fire. Parchment paper is a necessity when baking.

What Temp Does Wax Melt?

The wax will melt at a temperature of 130 – 200 F. Do not heat the wax higher than 200 F.  The wax will discolor if held at higher temperatures for long periods.  Using a thermometer is crucial in the melting process and remember to never leave your heated wax unattended.

What Can You Use Instead?

If you’re looking for a non-stick surface to use for baked goods, your best bet is parchment paper or silicone baking mats. They both help to prevent food from sticking and are completely safe to use in the oven. Aluminum foil can also be used in the oven.

What Is Parchment Paper?

Parchment paper is in fact completely different from other types of paper.  It is produced by putting paper through a sulfuric acid bath. This bath causes the paper pulp to turn into a substance that is gelatinous or gel-like, which is what creates that material that has much more durability than normal papers. Then, the parchment paper gets a coat of silicone, similar to the coating of wax on wax paper. A piece of parchment paper has a ton of stability, density, heat resistance, and low surface energy which is responsible for making – parchment paper a great non-stick surface to be used for cooking or baking.

Parchment paper is typically similar in appearance to actual parchment as it is thin and brown but can also be sold bleached or white.

Parchment paper and wax paper share numerous traits in regard to cooking.

Despite having many similarities and despite the fact that their names are often used interchangeably, wax paper and parchment paper are not exactly the same.

Due to the wax coating on wax paper, it is not good at handling the heat. Anything significantly above room temperature will trigger the wax to melt. Additionally, these high temperatures create a risk of setting the paper on fire.

On the contrary, parchment paper has a silicone coating so it can handle heat well. Even when exposed to high temperatures (over 450°F), the paper might brown, but will never burn. 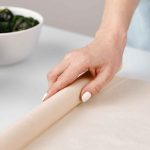 You’ve probably gone to bake at some point only to realize that you are out of parchment paper! So, you might be wondering if you can put wax paper in the oven as a substitute.
Keyword Can you put was paper in the oven