If you are on a vegan diet, you might be wondering whether fries are vegan. In particular, you may consider French fries as a side dish at a restaurant. You might expect this simple potato dish to automatically be vegan but some establishments use animal products in their preparation of fries.

Given that fast food places are catered to the general population, it can be difficult to find a vegan meal at these spots.

If you’d want to make sure the fries are vegan, the best option is to make them at home.

Make sure to use only:

Then it is guaranteed vegan!

It depends on the ingredient list of the product. Most of the time, frozen French Fries are completely  plant-based but there will sometimes be some non-vegan ingredients including:

Almost all restaurants use frozen fries, so be sure to ask your waiter if the ingredient itself is vegan.

Unfortunately, fries produced in their US branches are not vegan friendly. The official ingredients and allergens section have Natural Beef Flavor listed. This consists of both dairy and meat derivatives!

KFC fries are vegan as no dairy or animal-based products are used in their production.

However, not all branches have separate fryers for their veggie and vegan friendly sides. You should ask the specific location about their cooking methods before you order.

Unlike their competitors, Burger King fries are one hundred percent vegan. Every single batch is made using vegetable oil in dedicated fryers, so go ahead and enjoy every single bite without the guilt.

Taco Bell has directly defined vegan food as “recipes that contain no animal products,” being careful to emphasize that they “use the same frying oil to prepare menu items,” and that it “may or may contain animal ingredients.”

If you enjoy a nostalgic twist, you will like how Wendy’s keeps the skin on their fries. Not only are they tasty but they are cooked in vegan oil, making them a perfect option!

However, keep in mind that their fries and other Wendy’s options have been “cooked in the same oil as menu items that contain wheat, milk and fish.” It totally comes down to your own preference whether you  are comfortable with this or not.

This might be common knowledge but the fries at Five Guys are known for their taste that is distinctly nutty as they are cooked in 100% peanut oil. This method of preparation is completely vegan, so you’re safe on that front.

Chick-Fil-A’s official website states that they offer several vegan options but they make sure to tell customers that they “do not designate vegetarian-only preparation surfaces.” This is important for more vigilant vegans to keep in mind.

Those who enjoy their famous Waffle Potato Fries will be happy to hear that they are absolutely vegan. From their preparation in canola oil, these fries use solely potatoes and sea salt. They are truly plant-based heaven.

Unfortunately, Popeyes does not participate in catering to vegetarians and vegans. They could not be farther away from being vegan friendly. It is said that all of their items have been fried in lard or beef tallow, which are certainly animal products.

Although Arby’s fries do not contain animal products, they share the same oil as their fish and chicken nuggets.

Jack In The Box

Jack In The Box’s fries, curly fries, and wedges are free of animal products but just like Arby’s, they are cooked in the same fryers as other meat products. 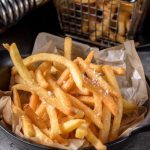 Given that fast food places are catered to the general population, it can be difficult to find a vegan meal at these spots. In particular, you might be wondering about fries as a side dish. You might expect this simple potato dish to automatically be vegan but some establishments use animal products in their preparation of fries.
Keyword Are Fries Vegan
Servings 6